Almost two months ago, I decided to jump on an intriguing print exchange put together by the wildly successful Sketchbook Project folks.  I am one of 500 artists creating a 12-print edition using hand-made methods of printmaking; The theme is The Drive Home.

In February, I thought, “That seems like a blast!”  What I hadn’t counted on was the mind-numbing, heart-wrenching pain of sorting through 21 years of stuff in anticipation of moving across the state in June.  By the end of March, this whole moving thing made choosing my take on the theme excruciating!  One idea focused on a Sierra foothill scene that felt like a slap to my Bay Area roots.  Two centered on roadside weeds, each central to only one area of California I had called home.  Again, another cheat. Another was a Bay Area scene, but how could I leave out my future home?  Nothing felt right and it seemed so important to get it right & it was bringing me down.  I went through four iterations, working them up all the way through the final sketch, before finally choosing a fifth.

While cleaning out my gardening bins this weekend, I came across a bag of seeds my sister put aside for me, having gathered them herself at a local vineyard where she worked, very near to the place where we grew up.  All native wildflowers, she wanted me to plant them this Spring on our hillside in the Sierras.  By the time I remembered, it was too late for this year, but they did give me my inspiration for the print!

The first time I became formally introduced to the California Poppy was as a tenderhearted and blissfully ignorant seven-year old.  I was cutting through a pasture on the way home from school, when I spotted a lovely clump of pretty orange flowers that would make a perfect bouquet for Mom!  What I didn’t know was that a policeman was eying me (probably for trespassing through that field) as I picked the dozen-odd protected California State Flowers.  He was waiting for me when I climbed over the barbed-wire fence!  Scared s*#tless, I remember thinking that I was going to go to jail, would never see my parents again, and that Mom would never even see the bouquet, etc.  It was a pivotal moment for me as far as giving up my lawbreaking ways.  I have struggled to exit the lines ever since!

Strangely, the incident did NOT put me off Poppies.  When I saw the seeds and realized that they had followed me through every move to a new home, in one way or another, I knew I had the right muse.

Using my own photos for reference, I sketched out a few ideas for the small print, which was limited to no more than 5″ x 7″. 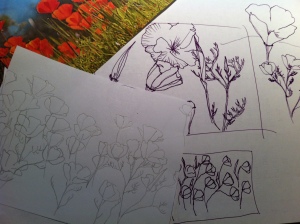 Then, I transferred the winning design loosely onto the copper plate, already coated with hard ground. I used a very light hand with the needle and spent lots of time making those tiny dots around all the flowers to give it background.  I had already moved my aquatint box to the Mountains! 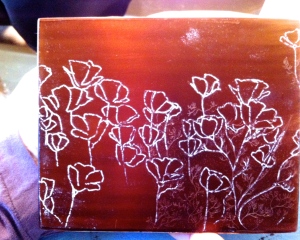 I slid the plate into the Edinburgh etch for 50 minutes.  After a little peek, I put it back in for another 15 minutes. 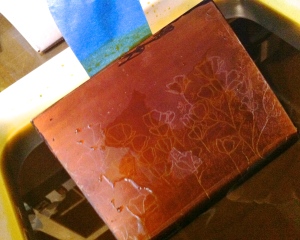 I used Soysolv to remove the hard ground, which gave me my first hint of what I had. 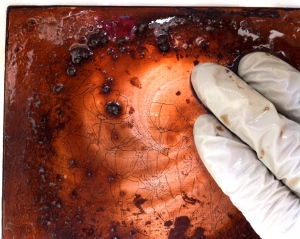 I used some old ink I had sitting under a latex glove on my glass for the test proof.

Then followed up with some color proofs to work out what I should do for the Exchange. 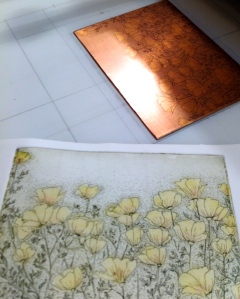 A concurrent edition will be printed for sale in my Etsy store sometime in October!

This etching will be the last edition to print out of my Oakland studio & I can’t help but think how perfect the universe is; The Drive Home theme, the process of finding my muse, my sister’s help in finding it.  I am hoping that this move, these changes our family faces this year all follow a similar pattern; Challenge, effort, discovery, success.  (Or at least understanding.)

And I will have a perfect reminder for wildflower planting already in hand when Spring rolls around again next year!